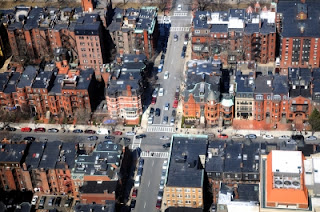 Prepositions of location and relative position, when used for describing city features or giving directions, are often difficult for students of English as a second language. Prepositions (and prepositional phrases) of location include in, at, by, on, on top of, opposite, across from, between, beside, behind and alongside of. These are often called prepositions of place.
The difficulty in learning them is largely conceptual, not linguistic, and the concepts are cultural. For example, if we stop in the countryside and ask where to find Altanbaatar’s ger, we may be told it is “behind the mountain.” From our present location, we must ride over or around the mountain to find Altaa. However, when we arrive at his ger, he might tell us he enjoys the location of his home in front of the mountain. In this example, the location of the ger is relative: it is behind the mountain to the person giving us directions to find it but in front of the mountain to the person living there.
This style of description works well enough in the countryside, where geographic features and family homes are spread widely apart. In a city, however, buildings and streets are much closer together. If we try to give directions in a city by using prepositions in the relative, countryside sense, the result is inexact. For example, “Where is the circus?” “It’s in front of the state department store.” That is only marginally true. The circus is 250 meters away from the department store. Anyone looking for the circus exactly in front of the department store would find only an open plaza.
It cannot be said often enough that we must learn a language in conjunction with the culture to which it is native. Using only a dictionary – or a computer – to do translation produces odd and often irrelevant results. “Зоогийн гаазар хаана байна вэ?” would be confusing to a native English speaker if translated as, “Where is the food place?” Yet that is a word-for-word transliteration. Is the person seeking a food market or a restaurant? The reply, given as directions, could be very different. The translation must take into account not only the words, but their collective meaning in the culture of the language.
And so it is with English prepositions of location. The language, especially American English, reflects an urban culture. When directions are given or a location is described in this language, the expectation is that they will be precise. Hence, “Where is the circus?” must be answered in English with words such as, “It is three blocks south of the state department store,” or, “It is between the American Information Library and the Shim Supermarket.”
Because this is a cultural concept, not just a vocabulary exercise, students often find it a difficult subject to grasp. The typical lesson plan for teaching English prepositions of location involves drawing a simple city map on the blackboard, such as:

This is a useful technique. The teacher can point to various buildings on the map and ask students to tell where they are in this “city.” For example, “Where is the school?” A student may answer, “It is near the park.” While correct, this answer is not good enough. The school’s precise location is “at the intersection of Fox Street and Elm Avenue, across from (or opposite) the park and the bank.” Similarly, the post office is “on Fox Street between the school and police station and opposite the supermarket.” Following this modeling of the conversational use of these prepositions, the students should be asked to do the same in pairs.
Experience has shown, however, that students often cannot relate a map on the blackboard to the reality of the city streets. Thus, after the vocabulary has been learned and practiced in the classroom, I always take my class onto the streets for practice. This produces a measure of excitement because it is different from the normal lesson and because students love to get outside when possible. The excitement conveys and serves to make the lesson more memorable.
As we hit the street, I tell them, “Here is our college. What is beside the college?” That’s easy; the food company is beside the college.
“What is opposite (or across from) the college?” It’s the food company’s shop.
Now it gets a little harder. “Where is the kindergarten?” Inevitably some students will answer, “It is near the college.” Again, this is a correct answer but not good enough. The kindergarten is behind the college and food company and opposite the apartment building (or, in British English, the block of flats.)
We begin to walk around the city. This exercise takes about 90 minutes, but it is well worth the time. If you have only one 45-minute class period with the students, break the tour into two days’ exercise. The walking lesson of place prepositions is well learned by most students. The exercise is far more successful than the map-on-the-board alone, although the classroom lesson with the map is necessary as a prelude to the “walkabout.”
As you tour the city with your students, stop frequently and ask questions of location or position that require prepositions in the answers. Give encouragement for good answers and gently correct wrong or insufficient answers. I find that I most often have to correct students who want to tell me only that one building is “near” another. At each stop, ask the students to practice describing to each other the locations of each building, monument or park that is at hand.
When the students return to the classroom (perhaps the next day,) ask them to recall what they saw and to describe the locations. This, too, can be done as pair work.
I wish you success in teaching propositions of location and relative position. It isn’t an easy lesson, but it can be done quite satisfactorily by taking your classroom into the streets.

Get Articles by Email