Teaching with Board Games

by Kathryn Newby
Kathryn Newby has been teaching at Zuunmod English College for the last three years. Next year she will teach in Khovsgol aimag.

Materials
Description
The game board is made up of 12 stations with varying numbers of spaces in between each station.  Players begin at the first station marked START.  Each player rolls the die and moves their game piece the amount they rolled.  If their piece lands on a station they must say something using the particular language structure we are practicing.  If their game piece doesn’t land on a station they don’t have to say anything and can just wait for their next turn.  Each player continues like this until they reach the last station marked END.  To make the game a little more interesting and competitive you can cause the students to move their game pieces backwards a certain number of spaces when they land on particular stations.  There should be 10 stations that require players to use the language structure (the START and END stations don’t require players to do anything).
I chose to use pictures of vocabulary words at each of the 10 stations on the board.  I then wrote particular instructions about language structures to be used at each of the 10 stations corresponding to the picture. The instructions for 5 of the stations also contained directions for players to move their game piece back a certain amount of spaces. While playing, players had to identify the picture and then look at the whiteboard for the corresponding game instructions. 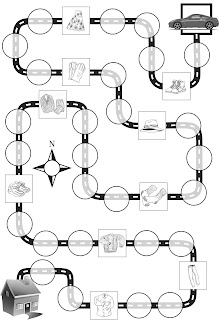 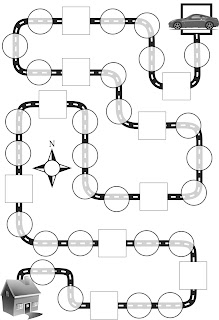 (Click on image to make it bigger or right click and save game boards to your computer.)
Here is an example of how you can use the clothing stations game board (on the left) with beginning students. The goal of the game, with these instructions, is to give the students practice with clothing vocabulary and singular and plural nouns.
When students land on a clothing station they must ask one person in their group if they wear that kind of clothing. They should ask and answer in complete sentences.

Example: Tuya is at the beginning of the game and rolls a six with the dice. She moves her game piece six spaces to the station that has a skirt.
Tuya: Do you wear a skirt, Bat?
Bat: No, I don’t wear a skirt.
Then Tuya moves her piece two more spaces because the directions say “Skirt: go forward two spaces.” 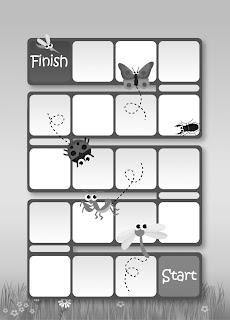 The game board shown above practices combining various actions with modals or modal phrases to make requests. The game can be adapted to help your students practice many kinds of grammar structures by changing the content of the squares. Don’t limit yourself to words, sentences or questions. You can also draw pictures of vocabulary in the squares and have your students practice using these words in sentences.

To play the game you’ll need game pieces (different colored candies will work fine), a die*, and the game board.
Example: Beginning at the “Start” square, a player rolls the die and gets a two. He moves his game piece two spaces, landing on “turn off the TV”. To form a sentence, he will use the modal “could” which corresponds to the number (two) he rolled with the die. He should say “Could you turn off the TV?”  You can encourage the other students to respond to his request.

Below are examples of how to form the proper grammar structure for each modal/modal phrase:
*”Die” is the singular form of “dice” which are six-sided cubes with different numbers of dots on each side. See below for directions on how to make dice.


How to Make Dice 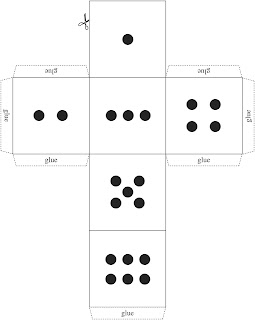 First, right click on the image above and save to your computer. Then print it out as large as will fit on a piece of THICK paper. The cut around the border with a scissors.

Then follow the diagram below on how to fold your die.