by S. Chimed
Chimed teaches at the National University of Mongolia, in the School of Mathematics and Computer Science.

First of all, through the Practical English Teaching Journal, I’d like to greet everyone who is doing such a challenging and interesting job–English Teaching. I’d also like to express my sincere gratitude to English Language Institute and PET Journal colleagues who help us to join together and share with others.
This time I’d like to share my experience on how to improve my students’ speaking through using five-minute student presentations in every lesson. 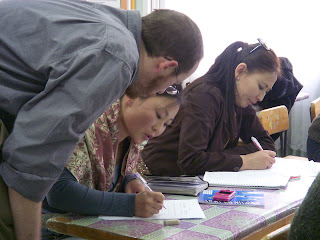 Very often, we English teachers notice that many of our students can successfully take grammar tests, write short essays, read texts and understand them, but when we ask our students to talk about the reading text, or to orally answer the questions from the reading they may have some difficulties. This is not only the students’ fault, because as language teachers we pay more attention to grammar in order to prepare our students for local and national assessment tests. Also, often we have a lot of students in one class and they have varying English abilities. As a result, during English class just the quick and advanced students have a chance to talk and the slow and shy ones are left behind. Because of these reasons, sometimes we don’t push our students to use the language to communicate with others, even though the latest textbooks (which are used in the secondary schools and universities) have a lot of good pair and group speaking activities for us to use during class.
However, we all know that the goal of any language learning is communication. For example when our students leave their school, university, or college and go to work somewhere maybe they’ll be interviewed in English as a language test but they probably won’t have to take a written grammar test.
For this reason, over the past two years, I've been helping my students to improve their speaking a lot. A “five-minute presentation” is a kind of speaking activity. Each of my students do this as individuals, and get certain points for it. At the beginning of each semester I give the class a list of the students names with specific presentation dates so that everyone will be involved no matter their English level.
My students can choose any topic for their presentation and they can use any kind of information technology such as the Internet, TV, radio, encyclopedia, magazines or books, but there are certain requirements to do the presentation:
The advantages of this activity for students are: Everyone spends individual time in order to do the presentation. It is not very hard for them because the news somehow should be connected to their interests or hobbies. Whenever they get the news they work on it by reading, translating, and writing at the same time. For the student presenting the news, it’s good practice to talk in front of people and explain something to others in an understandable way. If there are 12-15 students in a class, each can do the presentation three times in a semester; if there are 20-25 students, each can do a presentation at least two times in a semester.
After the presentation, the rest of the students ask some questions about the topic. The students who are listening to the presenter try to focus their attention in order to catch the news. It’s also good practice to listen to different people and try to understand them. I have noticed that the students compete with each other to do the best presentation every time. My students are interested in and enjoy this activity, and their speaking skills are improving.  Yes, there is nothing more rewarding for me than to see my students’ improvement!

Here is an example presentation that was done by my first-year student N. Narantuguldur:


~~~~~~~~~~~~~~~~~~~~~~~~~~~~~~~~~~~~~~~
Olympic Games
According to historical records, the first ancient Olympic Games can be traced back to 776 BC. They were dedicated to the Olympian gods and were staged on the ancient plains of Olympia. They continued for nearly 12 centuries, until Emperor Theodosius decreed in 393 A.D. that all such “pagan cults” be banned. Olympia, the site of the ancient Olympic Games, is in the western part of the Peloponnese which, according to Greek Mythology, is the island of “Pelops”, the founder of the Olympic Games. Imposing temples, votive buildings, elaborate shrines and ancient sporting facilities were combined in a site of unique natural and mystical beauty.
Olympia functioned as a meeting place for worship and other religious and political practices as early as the 10th century B.C. The central part of Olympia was dominated by the majestic temple of Zeus, with the temple of Hera parallel to it. The ancient stadium in Olympia could accommodate more than 40,000 spectators, while in the surrounding area there were auxiliary buildings which developed gradually up until the 4th century B.C. and were used as training sites for the athletes or to house the judges of the Games.
Now days, the Olympics are not only a sports competition. Actually the Olympics represent peace and unification of the whole world. Also the country, which is organizing the Olympic games is very important. During this time, people all over the world pay much attention to that country. That’s why hosting the Olympics is one of the biggest promotions for a country, in other words it is a good opportunity for them.
I think Olympic Game also can express the development of a country. We see that highly developed countries usually have huge numbers of medalists in the Olympics, such as the USA, Russia, and China, but at the same time there are many countries that do not have even one medal.

Beijing 2008
There are 163 days to go! The opening ceremony of the Beijing Olympic Games will be on August, 08, 2008. In Beijing, and some other big cities in China, they are preparing everything perfectly. Beijing is completely changing because of it. Even people who live in Beijing are learning English and working to improve their social etiquette. The tickets for the Opening ceremony, cost more than $600 each, and are almost sold out.

The next Olympic Games will be organized by the following countries:
-2010 in Vancouver, Canada /winter/
-2012 in London, Great Britain /summer/
-2014 in Sochi, Russia /winter

Get Articles by Email